Major Nathan Miller was so pleased with Priority Moving – San Diego Movers services that he sent the office a signed poster of the Blue Angels.

Priority Moving has moved many individuals that are serving their country including Major Nathan Miller and Generals, Admirals and other top brass.  We are proud to do it and proud of their service to the country.  These individuals are in the Army, Navy, Air Force and Marines. 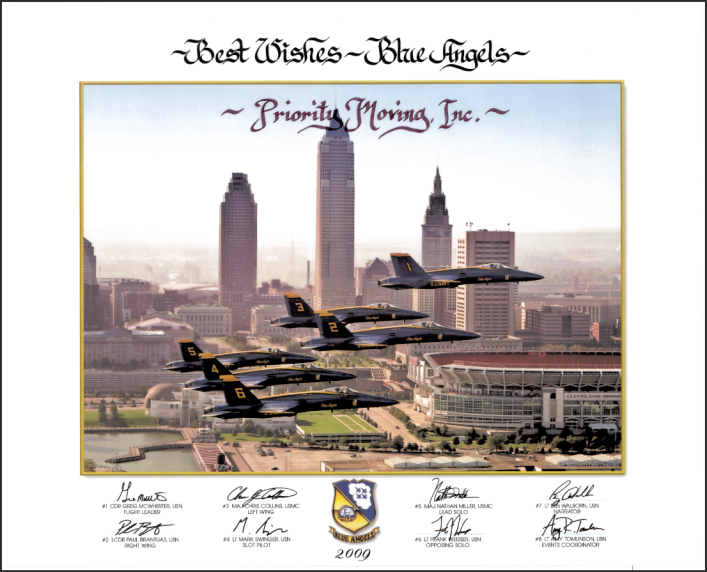 At the end of World War II, Chester W. Nimitz, then the Chief of Naval Operations, ordered the formation of a flight demonstration team to keep the public interested in naval aviation. The Blue Angels performed their first flight demonstration less than a year later in June 1946 at their home base, Naval Air Station (NAS) Jacksonville, Florida. Flying the Grumman F6F Hellcat, they were led by Lt. Cmdr. Roy “Butch” Voris.

By the end of the 1940’s the Blue Angels were flying their first jet aircraft, the Grumman F9F-2 Panther. In response to the demands placed on naval aviation in the Korean Conflict, the team reported to the aircraft carrier USS Princeton as the nucleus of Fighter Squadron 191 (VF-191), Satan’s Kittens, in 1950.

The team reorganized the next year and reported to NAS Corpus Christi, Texas, where they began flying the newer and faster version of the Panther, the F9F-5. The Blue Angels remained in Corpus Christi until the winter of 1954 when they relocated to their present home base at NAS Pensacola, Florida. It was here that they progressed to the swept-wing Grumman F9F-8 Cougar.

The 2007 show season brought out more than 15 million spectators. Since 1946, the Blue Angels have performed for more than 427 million fans.

We are licensed and insured San Diego Movers (CAL T-189943). (MAKE sure your mover has a valid CAL T license at the California Public Utilities Commission).

We are also an agent for Wheaton Van Lines for your long distance moving needs.  In business for 65 years Wheaton is the only moving company ever to be awarded the Good Housekeeping Seal.

Established in 2002, Priority moving was founded on the principles of providing a consistent and high level of quality in moving. We have been featured on Fox 6 news (video on website), San Diego magazine, in the San Diego Union and numerous other news sources.

We were proud to be a certified ProMover – a designation granted only by the American Moving and Storage Association, and the only San Diego moving company honored with a supplier of the year award by the San Diego County Apartment Association.